First things first, these are not really burgers. Well, not in any traditional sense like my black bean burgers were anyways. These are basically mashed potato sandwiches -crazy amazing mashed potato sandwiches which your mouth will thank you for! So why call it a burger? Because this recipe is a dupe of a dish that I get at a local vegan/vegetarian restaurant and theirs is classified as, you guessed it, a burger!

Okay, now that we got that out of the way, let’s discuss this thing further, shall we? The burger patty itself is made from red potatoes and garbanzo beans that have been mashed together -the garbanzo beans add some more texture as well as a decent amount of protein! The seasonings added to the burger mixture are on point and give just a little kick of heat to your palate. After the patties are formed they get shallow fried to give the outside a little crispy, crusty goodness then, when it’s time to serve ’em up, tomatoes, sprouts, vegan mayo, and a special little mustard mixture join the party!

Sounds good, right? But also a little odd? I get it. The first time I had one of these burgers I couldn’t quite wrap my brain around it. I was expecting a more burger-esque burger and that’s not what I got. I was also expecting a different texture too. But, once I let go of my expectations, I was able to appreciate the odd but delicious little thing in front of me. I hope you’ll appreciate it too!

It all gets started with the red potatoes. Those babies need to be washed and then cut up -I cut each of mine in half and then into quarters. Once they’ve been cut up, they’ll get boiled until they’re fork tender. The cooked potatoes then get transferred to a large bowl where you’ll mash them just a bit before the other ingredients get added.

When the potatoes have been half-mashed, the garbanzo beans get added (those should be drained and rinsed) along with a little grated onion, finely chopped garlic, Ener-G Egg Replacer for 1 egg, and some seasonings. Everything then gets mashed and mixed until well combined. And don’t worry so much about mashing every single little garbanzo bean -some left whole is great from a textural stand point! 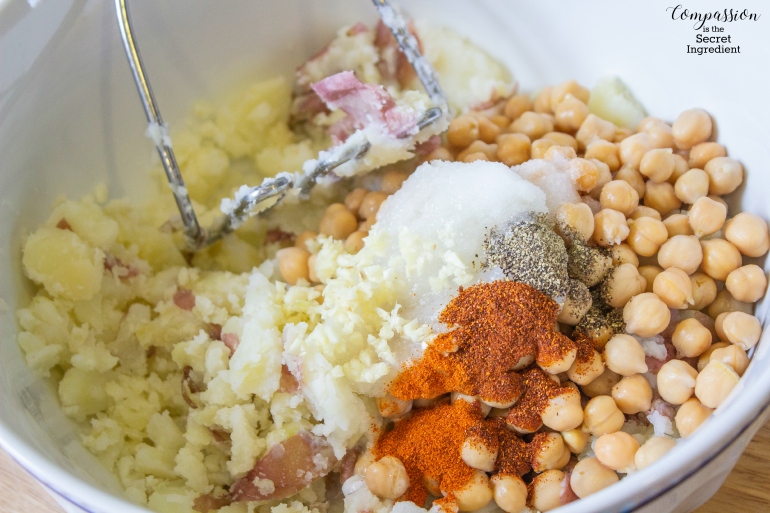 Okay, time to form the burgers! The bread of choice for these burgers is either a ciabatta or telera roll. Since these breads are more rectangular in shape, the burger patties themselves should be slightly rectangular in shape. The patties should also be pretty hearty in size! From the mixture you should make 5 burger patties total with each being about an inch an a half thick. Once all of your patties have been formed, it’s time to fry ’em up!

In a frying pan with a shallow layer of oil in it, over medium-high heat, each burger patty gets fried until both sides are golden brown. Once each patty has been fried, let them rest for about 5 minutes on a paper towel so that any excess oil can drain off. While they’re resting, it’s the perfect time to whip up the special little mustard mixture by combining the stone-ground mustard with some agave and giving it a good stir -couldn’t be easier!

After the patties have rested for a bit, it’s finally time to build the complete burgers! Cut the ciabatta or telera roll in half and coat the bottom half generously with vegan mayo. On the top half, slather on a thick layer of your special little mustard mixture -you really can’t have too much of this stuff! Next, on the bottom half, pop on a burger patty and then a couple slices of tomato. On top of the burger patty and tomato slices, add some sprouts then place the top half of the roll on and enjoy! 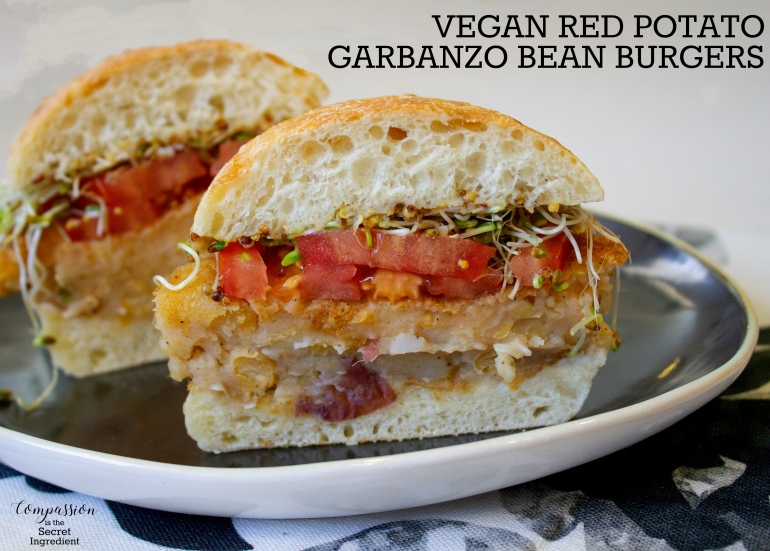