Last time I visited San Diego, years ago before I went vegan, I ate breakfast at some little beachside joint. The kind of place that’s only open for a couple hours in the morning and always has a line out the door so long that you just know it has to be good. I don’t remember the name of the restaurant though, or even what I ordered, but what I do remember –and thank goodness I do– were the hash browns that came as a side to my meal.

The hash browns they served were unlike any other hash browns I’d ever had before. They were fluffy and creamy on the inside, crunchy on the outside, and decadent as hell. Why though? I figured out, after going back specifically for the hash browns a couple more times during that trip, that there were eggs and dairy in them which gave them their amazing texture and rich flavor. When I got home I of course recreated them but, since going vegan, I’ve not attempted to make them -until now.

To achieve all that goodness without the not-so-good animal products, I turned to a couple pantry staples: Ener-G Egg Replacer and coconut cream. These two help my vegan version get all soft and delicious on the inside just like the original version. Did I hit the nail on the head? Uh, I not only hit the nail on the head but I knocked it through the board and it dropped like a mic. I think my version is even better than the original too, thanks in part to the fact that I opted to add shredded onion to mine. I also know for a fact that mine comes together much faster because I use frozen shredded potatoes rather than freshly shredded ones. Truly, if you’re a lover of anything potato, you definitely will want to give this recipe a try!

It all gets started by putting a little vegetable broth in a large microwavable bowl. The broth gets microwaved for about 15-20 seconds to warm it up and then some Ener-G powder gets added to it to create our “eggs.” Once that mixture has been thoroughly combined, the coconut cream gets added along with melted vegan “butter,” and some seasonings.

The next step is to toss in 1 pound of frozen shredded potatoes (the kind with no salt added), a decent amount of shredded onion (you’ll want to wear your onion goggles for that whole shredding moment, trust me), and a bit of flour. Once combined, it’s time to get frying! 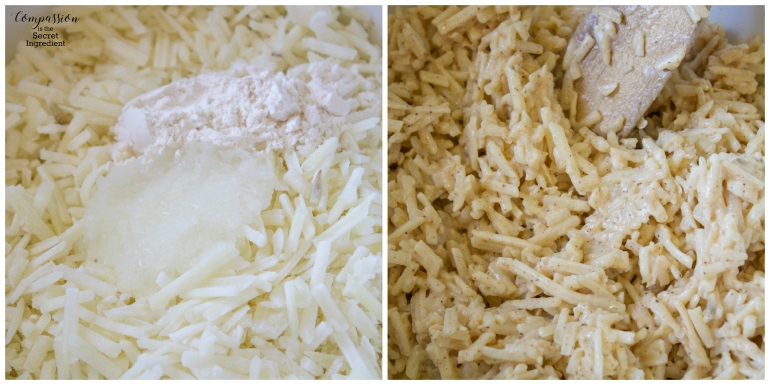 Pop a large skillet on your burner, add oil, then crank up the heat to medium-high (more on the high side than medium). Once the oil is all heated up and ready to go, carefully dump your potato mixture into the pan, pat it around with your spatula so it lays evenly, and then turn the heat down to medium. Let the potatoes cook, untouched, for about 10 minutes.

When the potatoes are done, some parts will be good and crispy and others will be tender and moist. Let them rest for at least 5 minutes before serving then enjoy!