About a month and a half ago I shared with y’all my recipe for Vegan Southern-Style Biscuits and my-oh-my did they become beloved in a hurry. Now of course they’re delicious all by themselves but there is one particular way that I enjoy eating them and that’s under generous amounts of glorious gravy -can I get an Amen?! In making my gravy I like to use a little something special to boost the flavor. What is that little something special you ask? Magic!

(Hilarious side note speaking of magic: I once had a dream that me and David Blaine were set to be married but he wanted to bail on me so we went to the Dr. Phil show to have him help us with our premarital problems. Dr. Phil got David to admit the reason why he didn’t want to marry me and that was because he felt that I wasn’t “magic enough.” #OhTheCrazyShitIDreamAbout #MrsDavidBlaine #OrNot)

Okay… now back to the real magic. Magic in the form of Bragg Organic Sprinkle, that is! This stuff has literally everything in it, 24 herbs and spices in total, and it’s really good. It takes what could have been just a basic gravy and transforms it into anything but basic. Now even though the Sprinkle makes this gravy pretty flavorful for a white gravy, it’s not overpowering so you’ll still be able to taste those big beautiful biscuits underneath.

As for said biscuits, you’ll need to click on over to that using the link above. There you’ll find pictures of the process, and of course the recipe, so that you can whip up the 1st part of this 2 part dish. The 2nd part, the gravy, is right here…

To get started on the gravy, put 1 stick (yes, you read that right) of vegan butter into a large saucepan, or large cast-iron skillet should you want to get really southern with it, and let it melt down over medium heat. Once melted, add some flour (exact measurements are in the recipe below) and then whisk the mixture until bubbling and kind of foamy looking. (If you’ve seen some of my recipes thus far then you’re more than familiar with this process!)

The next step is to add the almond milk and bring the mixture to a boil. Boil for just about a minute or so and then reduce the heat to simmer.

You should be whisking or stirring the mixture the whole way through this process, just so you know. A gravy should never be left unsupervised or it’s likely to act out or burn. It’s naughty like that.

As the mixture begins to thicken, add in the seasonings being sure to crush the Sprinkle good in the palm of your hand, or in a mortar and pestle, before adding it. 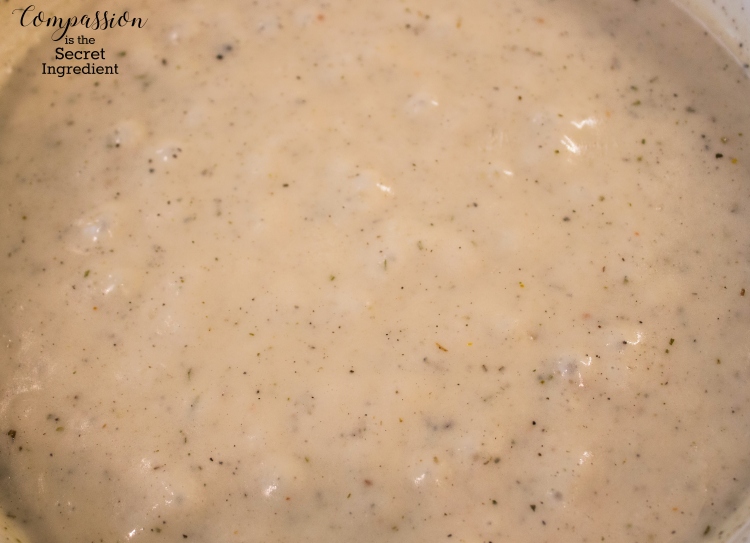 Cook the mixture a little longer and that’s pretty much it -you’ve got gravy! Plop it over some biscuits and enjoy!